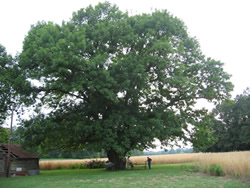 While every tree is special in some way, some have garnered attention by virtue of their great size, their age, or their historical significance.

Since the 1970's The North Carolina Champion Tree Program has recognized and celebrated the state's largest trees. Recently, we have been focusing our efforts on aligning the State Program with the National Program.

The guidelines for the program state that only tree species listed in the "Checklist of United States Trees (Native and Naturalized)", USDA Handbook No. 541 (September 1979) are eligible for listing on the state list. Since this handbook is not widely available, and to make it easier for citizens to check what is native or naturalized to the state, we have created a list of eligible species (PDF) for which we will accept nominations. According to the National Registry Guidelines, hybrids and minor varieties are not eligible for champion status.

Not all species currently listed in the State Champion Tree database are included in the eligible species list. These trees are not native to North Carolina and some are considered invasive. These trees have been moved to a separate list of Ineligible Species(PDF). Since the goal of the program is to highlight trees native to North Carolina, we will not be accepting new nominations for these species. Once these ineligible trees die the species will no longer be included on our state list.

We hope that you find these lists and links useful and we look forward to receiving your nominations.