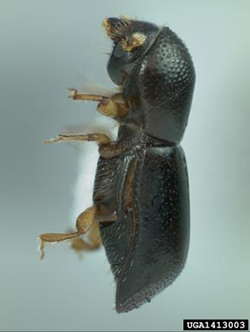 Adult redbay ambrosia beetle (about 1/16" long
M. Thomas, Florida DACS Division of Plant Industry, Bugwood.org
What is laurel wilt?
Laurel wilt is a fungal disease of plants in the Laurel family that is carried from tree to tree by a small beetle called the redbay ambrosia beetle (Xyleborus glabratus). ). The disease has killed nearly all of the mature redbay (Persea borbonia), the most widely affected host, in affected areas south of North Carolina. The fungus that causes laurel wilt (Raffaelea lauricola) is very aggressive and mortality is thought to occur in trees attacked by a single female beetle.

How does it kill a tree?
All ambrosia beetles carry a fungus with them which they "farm" and feed upon when they occupy a tree. Most of the time the fungus is not lethal to the tree, however, the redbay ambrosia beetle carries a fungus that is pathogenic, or capable of causing disease, to the trees. When the beetle bores into the wood they easily infect the tree with their fungus. Once infection occurs, the fungus spreads quickly throughout the tree's vascular system, preventing the movement of water within the tree. Choked of water, trees wilt and die within a few weeks or months of becoming infected. 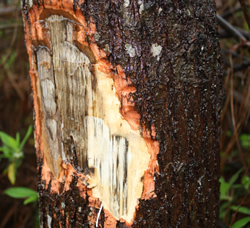 What plants are affected?
Only plants in the Laurel family are susceptible to laurel wilt. The most severely affected species is redbay, which is a medium sized tree commonly found throughout the eastern part of the state. Other susceptible trees and shrubs in the Laurel family found in North Carolina include sassafras, spicebush, pondspice, and pondberry. Pondberry is a federally endangered species and pondspice is a species of special concern in North Carolina. Though not found in this state, avocado, a commercially important crop, is also susceptible to this disease. Mountain-laurel, rhododendron, loblolly bay, and sweetbay (magnolia) are not susceptible to this disease.

Where is the disease currently found?
Laurel wilt was first detected in North Carolina in early 2011 and is currently known to occur in the southeastern part of the state’. Until 2019, North Carolina was the most northerly affected state in the U.S. However, the disease has since been detected in Tennessee, Kentucky, and Virginia. The beetle was initially detected at Port Wentworth, Georgia, in 2002 and the disease has been causing mortality throughout the Southeast since that time.

How does is spread?
The female redbay ambrosia beetles can fly, though the males cannot. To initiate a new infestation, a single female beetle flies to a host tree. Once there, she reproduces and is able to start a whole new population without even mating. Subsequent offspring disperse to attack new host trees.

Redbay ambrosia beetles can spread naturally through flight, but they can also be moved to new locations through the movement of infested wood. These beetles are wood borers, so they tunnel deep within the host trees. When the host tree dies, those beetles often remain inside the tree. If the killed tree is moved to a new location as firewood or other untreated wood products those beetles can emerge at the new location and start a new infestation. Remember, it only takes one beetle to start a new population.

Where is it from?
The redbay ambrosia beetle is originally from southeastern Asia and was likely introduced in wood products shipped from overseas. The ambrosia fungus carried by this beetle is not known to cause problems for trees in its native range. Laurel wilt most likely spread to North Carolina through movement of beetle-infested wood.

How many trees have died already?
Laurel wilt has caused extensive losses of redbay in affected areas, often killing more than 90 percent of redbay over 1 inch in diameter. Redbay seedlings, however, are plentiful and less readily attacked by the redbay ambrosia beetle.

Will it cause redbays to go extinct?
Though the long term effects of this disease are unknown at this time, laurel wilt has the potential to drastically reduce redbay populations in our forests. 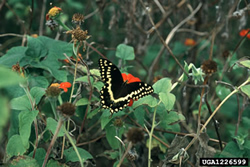 Palmedes swallowtail
Jerry Payne, USDA Agricultural Research Service, Bugwood.org
Why are redbay and other host species important?
Though redbay are not typically used for commercial purposes, they provide food and shelter to a number of animals including songbirds, turkeys, quail, deer, and bears. Specifically, two species of swallowtail butterflies rely almost exclusively on the redbay and spicebush to complete their life cycles. Additionally, this disease could lead to the complete loss of two rare plant species in our state, pondspice and pondberry.

How long does it take for the tree to die?
The laurel wilt fungus is very aggressive. Once the beetle introduces the fungus into the tree, the tree wilts and dies within a few weeks or months. 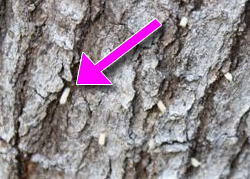 Frass toothpicks caused by the redbay ambrosia beetle
What does a tree affected by laurel wilt look like?
Trees infected by the laurel wilt fungus wilt and the leaves will turn from green to reddish- or purplish-brown. These wilted leaves may stay on the tree for a year or more. The disease also causes dark staining in wilted branches and the main stem of dead trees just below the bark. Redbay ambrosia beetles produce very tiny holes in the tree that may not be readily visible without peeling off the bark. Often, small "toothpicks" of sawdust and beetle excrement, called frass, form at beetle entrance holes as the beetles push materials out to excavate living space within the tree.

There are other ambrosia beetles that cause dieback in the crowns of redbay and/or create sawdust "toothpicks". Trees with one or two dead branches may be affected by these unrelated beetles that do not vector laurel wilt.

What do the beetles look like and when can they be found?
The redbay ambrosia beetle is an inconspicuous, cylindrical brown to black beetle about 1/16th inch long. There are multiple generations of beetles each year, so adults can be found year-round. Adults are most common from late June through September and less common from fall to early summer.

What can be done about it?
Currently, there is no reliable way to prevent or treat laurel wilt. Insecticides have not been effective in stopping beetle attacks, and fungicides are costly and must be re-applied annually.

Our best weapon in slowing the spread of this disease is to keep infected trees where they are. Do not move dead host material. Even moving chips or tree debris to landfills can spread the insect and disease to new areas. Trees killed by laurel wilt can be properly disposed of by cutting the tree and leaving it on the site, or burying or burning dead trees on the site following all state and local regulations. Saws and equipment used to cut and chip affected trees should be cleaned of tree debris and disinfected before moving to a new site.

What is being done?
With no effective control for this disease, the best we can do is to monitor this pest and try to limit its spread by educating people on the dangers of moving potentially-infested firewood. There are no quarantines, either federal or state, for this pest in North Carolina. Due to the reproductive capabilities of the redbay ambrosia beetle, it was determined that a quarantine would do little to slow the spread of this disease. The scientific community continues to conduct research to better understand the beetle, the disease, potential control measures, and the long-term impacts of the disease on our forests. We survey for laurel wilt in North Carolina annually, in the winter months. You can find areas where this pest has been found on the latest range map for laurel wilt in North Carolina.

What should you do if you observe dying redbays or sassafras and suspect laurel wilt?
Most importantly, DO NOT SEND SAMPLES. Sending samples of potentially infested material could transport the beetle and the disease to new locations. If you think you've found a laurel wilt-killed tree in a new area (based on the range map linked above), please contact your county forest ranger for assistance with confirmation and management recommendations.